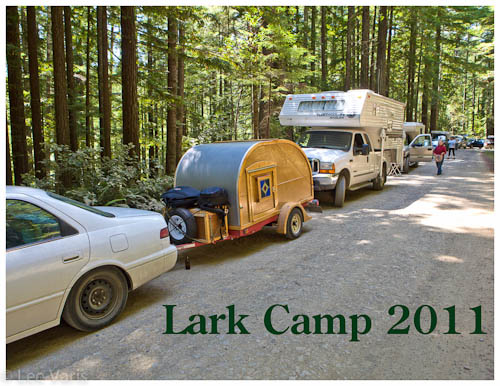 A Vacation in the Woods with a World of Music

You may have noticed that I haven’t posted in a while. That is because I was in the Mendocino Woodlands camp for the 31st year of Lark Camp, an annual festival of world music unlike anything else!

The Technopod cues up for Lark

I took time off after launching my new ebook to unplug from the internet and cell phone and tune-in to the spirit of world music at Lark camp. I have been going to camp here for the last three years and I’ve vowed not to miss an opportunity to share and learn in the relaxed woodlands setting. My primary passion this year was the oud, a middle eastern lute that has a strong presence in Turkish, Greek and Arabic music. The Camp also features music from the British isles, Western and Eastern Europe, Africa and the Americas in three distinct sections of this redwood forest. You can see photos from last year’s adventure here: Greek Tent at Lark This year I took a lot more video but I also spent plenty of time in the Greek tent late at night shooting in extremely low light with my Canon 5D mk2!

Late Night at the Greek Tent - dimly lit by christmas tree lights, it is quite the intimate setting to listen and play music until 4 am!

In case you think I’m just a tourist with a camera here, I managed to get my photo taken playing the Hang drum—a new instrument for me— which proved to be quite popular with the percussionists at camp. Multiple people would jam on it during lulls in the more authentic music that was going on most of the time.

The main challenge shooting in the Greek tent is the extremely low light level. I was always shooting at ISO 6400 and using the SteadePod, (a cool little string tripod I’ve talked about before). Unfortunately, I managed to get the wind up cable in the SteadePod scrambled up inside the unit and I had to resort to a makeshift version that was a lot clumsier. A small allen wrench would have saved me here, but of course, I did not pack one for this trip! A string tripod comes in very handy in a crowded environment where a regular tripod would take up too much floor space and be too slow to setup for the quick action shots I needed in the tent. You can make a simple string tripod with a length of sturdy string tied to a screw and screwed into the tripod socket at the bottom of the camera. You then pull up on the string to steady the camera. I’ve been able to get sharp images down to 1/4 second exposure times!

All the light in the tent comes from tiny Christmas tree lights strung up in the ceiling of the tent. In reality, this scene is not nearly so bright!

The Greek tent at Lark is the late night gathering place for the Eastern European and Mediterranean musicians as well as the home of the Greek Rebetika musicians. Its a kind of magnet for exotic music that sometimes features Indian Hindustani musicians depending on the people who make it to camp. One can find fiddle, clarinet, accordion, flutes, guitar and guitarrón, oud, bouzouki and buzouq, baglama, saz, doumbek and other ethnic drums! I’ve posted a number of images from Lark and the Greek tent on Flickr at:

My mobile studio and sleeping quarters

The Technopod was right at home in the camp but I was not able to use it much as a computer studio because there wasn’t enough full sunlight to keep the battery charged. I ended up bringing a tent as well and the pod was mostly used to house my instruments and camera gear. I didn’t even use the “kitchen” as the camp provides 3 meals a day at their facilities! Still, I was happy to have the Technopod with me this year even though I spent the evenings with my girlfriend in the larger sleeping quarters of the tent. Next year I might be solo and I’ll have a re-configured Technopod so we’ll see how it might work out.