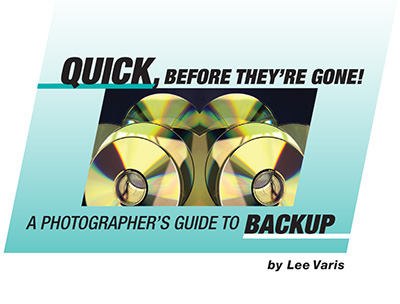 Preserving Image Assets into the 22nd Century and Beyond

After all is said and done here, we all feel a need to preserve our photography as a record of our existence! It is a way of announcing to the world that “we matter,” and it also offers us a sense of continuity in an environment of continual change. In fact, this preservation of how we’ve seen the world is an essential strategy for managing the changes that are always overtaking us, rushing past us into an uncertain future. It is also a way to forge our identity, to solidify it, and share this heritage with our heirs. It is a basic human need to leave our mark in the world, and what better way could there be but to leave behind a record of our vision.

My mother has felt this need, and though she was born too early to adapt to the computer, she has managed to preserve much of her family’s history through a meticulously-crafted collection of photo albums, that stretches back to the turn of the 20th century. The potential for preservation today is both greater and more fraught with peril than ever before. The great potential is the way that digital image assets can be duplicated ad infinitum without loss, every original detail preserved in the 1s, and 0s of perfect digital duplication. The peril is the ephemeral nature of the digital media that is more prone to electro-magnetic disturbance and the ravages of oxidation, and other environment degradations, than the traditional media that has survived centuries with relatively little adverse affects (until modern air pollution).

So, our overall strategy is to leverage the perfect duplication capabilities, while minimizing the sensitivity to degradation as much as possible. In practice, this means making additional copies on as many different types of media as possible, and storing these copies in different locations. Secure conditions are just as important as they would be for traditional media: one would avoid exposing any silver gelatin print to direct sunlight or extremes of heat and humidity, and similar precautions should apply to digital media as well.

Beyond all this, it is important to take responsibility for the curating of our own work! While an argument can be made for the ultimate evaluation of our work being made by others after our death, we are the ones who should decide what our most valuable images are now. These choices reflect our artistic sensibilities, and this is what we wish to share with the world, now and into the future. This means that we are doing everyone a favor by culling out the majority of dreadful images so that our biographers and archivists have an easier job of cataloging our work. This can be very hard: how do you know whether you will change your mind later, is this really that bad, etc. – we all error on the side of inclusion. Still, it is important that some images be allowed to vanish from the archives so we can preserve only the best representation of our life’s work.

My current strategy is to revisit old work two to three years after the fact, and go through and do a brutal edit… deleting images that are clearly not critical to the collection. My first effort at this eliminated reams of paper, a fairly large collection of old film, and negatives from jobs that have long since been forgotten.

This freed up a large amount of physical file cabinet space, but it also taught me that the more crap we hold onto, the more cluttered our minds are with extraneous baggage that keeps us weighted down and insulated from new experiences! Yes, we can hold on to certain things of value; but try and hold on to too much, and one spends way too much time, and money with the past at the expense of the future!

My next effort at house cleaning was a digital one, and I intend to practice this in a similar way from now into the future. I went through every digital asset I could find in a readable format, skipped over the bad images, and copied everything I thought had some value on to a new external hard drive. I had things on CDs, DVDs, and old hard drives that had been copied from DAT tapes, Syquest cartridges, Jazz disks: tons of old digital images. In some cases these files were in unsupported formats that had been partially converted into standard image files. Basically, I collected everything I thought was useful onto a new 1-terabyte hard drive, and labeled that “Legacy” work. This consolidation brought image assets from multiple small capacity media into one larger capacity hard drive, which was immediately duplicated for safe keeping. In the process, image assets that had errors were discovered and mostly corrected (as I had still multiple copies of things).

This culling of old work and consolidating onto new media should be a regular activity for anyone serious about image archiving. The process of migrating onto new media is in it’self a valuable act of preservation. Combine this with critical editing, and you can insure that the value of your image assets will increase into the future rather than ending up as a complete mess that is not worth going through.

I look forward to new technologies that will make storage media immune from degradation, just as advances in inkjet technology have finally rendered color prints more permanent now than they have ever been. Perhaps we will see laser-encoded crystal cubes that store thousands of terabytes of digital data in a tiny cell phone sized medium, impervious to all environmental attacks in our lifetimes. It is possible! In the meantime, keep making multiple copies, and plan on duplicating assets onto new media as it becomes available. The goal is to keep your images fresh and readable on current equipment. Make sure you copy things off of any media format that is orphaned. Anyone remember floppy disks? How about Photo CDs?

I believe that new businesses will be formed that will handle data migration for a fee but I wouldn’t count on it, nor would I count on these services to support older devices, CD readers, DAT tapes, etc. I have recent experience with audio master tapes, recorded 30 years ago, that were encoded with dbx noise reduction; I could not find anyone that still had an 8-track tape machine that could read the dbx format! Even though the tape media was still good, it was useless because I couldn’t find the equipment to read it. We can’t count on manufacturers to maintain backward compatibility with old formats!

The archiving methods outlined in my new book should be easily adaptable to new media, simply by replacing the hardware component of the system. But be attentive to the potential for image file formats to go extinct, and plan on converting and copying anything that might be on the verge of going out of date. Nothing is immune from this; so just pay attention.

To be informed as soon as the book is launched, please be sure and sign up for my email list, if you haven’t already…